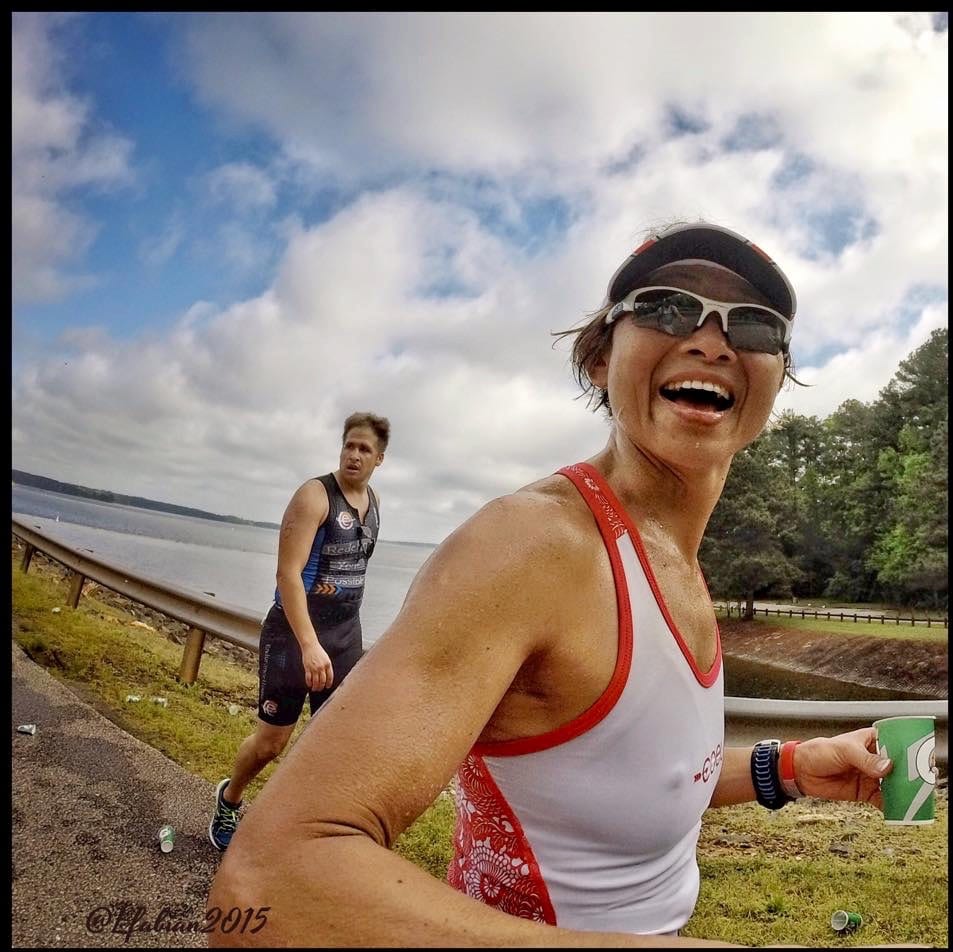 Meet Reiko Donato, 56, this week’s over 50 athlete of the week. Inside her petite frame beats a heart of a fierce warrior – whether she is competing in a triathlon or working to support her special needs daughter, Alex. Read Reiko’s story.

Bold Journey From Japan to Atlanta

Reiko was born and raised in Japan. While in college in Japan, Reiko participated in an exchange program. During her time as an exchange student, she wrapped up an undergrad degree from the University of Missouri in TV, Radio and Film, and her friends in Japan graduated and began work. The reports from these smart, talented women were daunting – young women were not being given meaningful career opportunities.

As soon as Reiko finished her degree from Sophia University in Japan, she came back to the US to seek a new life – one with greater opportunity. She returned to the University of Missouri, this time to earn an MBA in Marketing in 1984.

Reiko began a successful career in marketing research, initially in Ohio, where she met her husband, Rich.  After a stint in North Carolina, Rich and Reiko moved to Atlanta with their six month old daughter, Alex.  At age 12 months, after having seizures, Alex was diagnosed with tuberous sclerosis complex (TSC), a genetic disease that causes non-cancerous tumors to form in various vital organs, primarily in the brain, eyes, heart, kidneys, skin and lungs. TSC is also the leading known genetic cause of both epilepsy and autism.

Almost immediately, Reiko became involved in learning everything she could to help Alex. She became a volunteer at the Tuberous Sclerosis Alliance – a national non-profit organization that is dedicated to finding a cure for tuberous sclerosis complex and improving the lives of those affected. Reiko went from simply volunteering and chairing local  support groups and fundraising events to becoming a member of the board of directors of the TS Alliance. 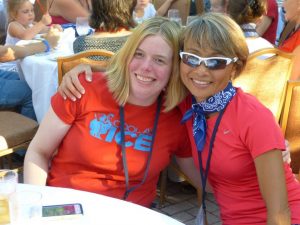 Reiko at a TSC Conference

In 2009, when her company moved its headquarters to Kentucky, Reiko ‘retired.’  With more free time, she threw herself into her board position at Tuberous Sclerosis Alliance and caring for Alex. And to triathlon.

A Triathlete is Born

Reiko has always been active – she liked to run – and liked participating in 5k and 10k races. She also liked riding her bicycle and found friends to share her love of riding. Soon after she retired, friends encouraged her to give triathlon a try.

As with any other endeavor Reiko dedicates herself to, she began training hard for her first triathlon. She didn’t just finish her first triathlon in 2011 – she placed first in her age group! She loved the preparation, the race and the friends she made – she was hooked! 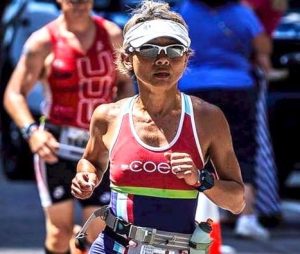 Rieko Concentrating on Her Race

The wins stacked up:

In fall of 2013, Ironman announced a new Ironman venue – Chattanooga. With its proximity to Atlanta and dozens of friends signing up for the race, Reiko committed to training for and completing her first full Ironman in September, 2014 (2.4 mile swim, 112 mile bike and 26.2 mile run).

And her impressive work continues – she: 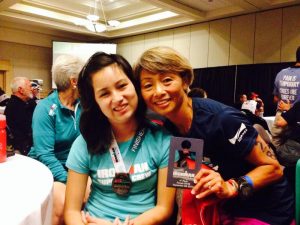 Rieko and Alex at Ironman Chattanooga

And her plate is full for 2015 – she is training for two Ironman races – in Wisconsin and Florida, in addition to two Olympic distance triathlons (placed 3rd in her  both) and one half ironman (placed 6th). Her training plan included running her first standalone marathon. She ran the Albany (GA) Marathon, placed 3rd in her age group and qualified to run the prestigious Boston Marathon!

Reiko’s friends are amazed by her passion and her tenacious pursuit of excellence at everything she does – whether training/competing in endurance sports or fundraising or advocating on behalf of those struggling with TSC like her daughter.  They love her positive attitude.

“Adversity has no definition in her vocabulary,” remarked one friend. 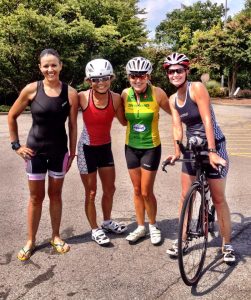 Reiko and Her Training Buddies

What drives Reiko to compete in triathlon?

“Until I started triathlons, I had never ‘trained’ formally for any race even though I had participated in many run races.  I discovered that I enjoy the discipline involved in triathlon training, and meeting and making new friends who have passion for the same sport as I do.  I have also found that I enjoy competing against others and seeing how I stack up against women in my age group.  It is also important to me that I have a ‘hobby’ that has nothing to do with TSC or the challenge it brings to our life.” 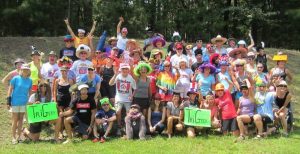 Advice for Getting Fitter after 50

Find something that you enjoy that’s just for you.  It doesn’t matter what it is – walking, yoga, dancing, fitness classes, hiking, cross fit….  Becoming and staying fit does not always have to involve hardcore training.  You have to find joy in doing what you do.  The day I stop having fun is the day I quit triathlon!

The Tuberous Sclerosis Alliance is dedicated to finding a cure for tuberous sclerosis complex (TSC) while improving the lives of those affected. You can learn more about TSC and the TS Alliance. You can donate to help Reiko’s fight to find a cure for TSC by going to her fundraising page. 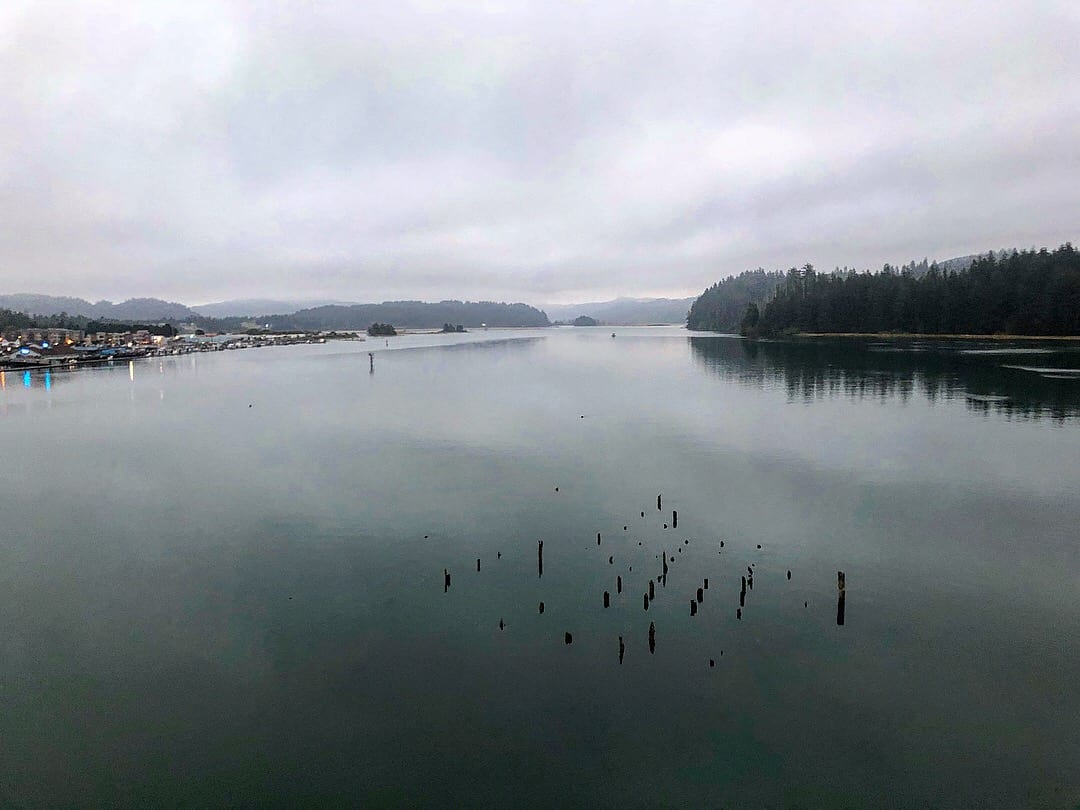 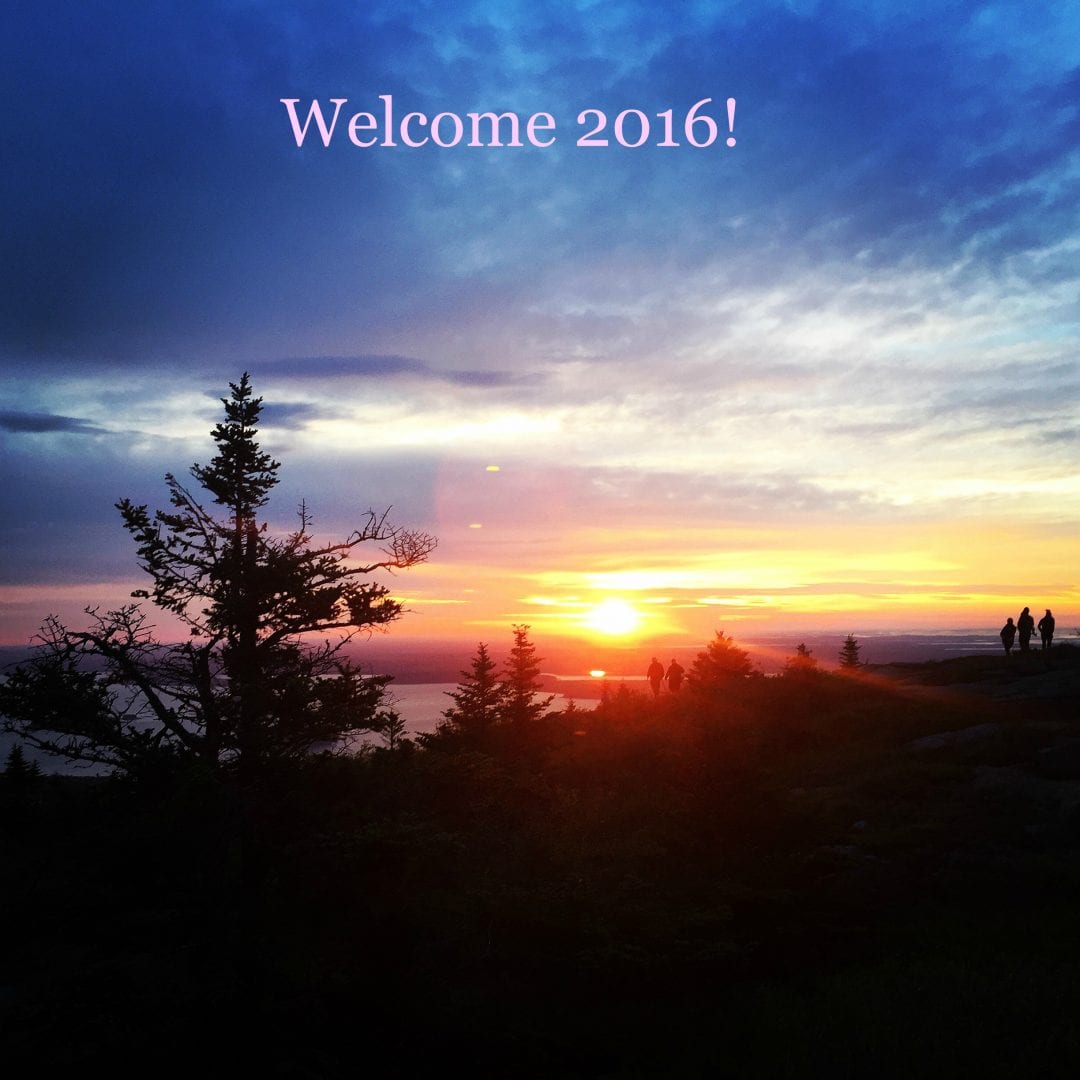